From longtime CESJ member and “Happy Revolutionary” Barbara Olson in Denver, CO, a little break from all the serious and scholarly prose expounding on the Just Third Way paradigm…. 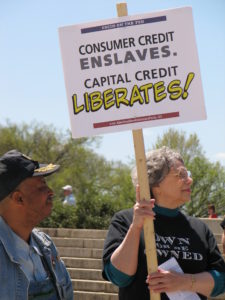 When I’m at my lowest in my longing for economic justice, I look for pen and paper in hopes I will write something that will turn the tide and get the world’s attention, which results in everybody sporting a light bulb over their heads and  the world’s mad dash to establish the Just Third Way.

Instead, I barely manage to write a bad poem on the subject.

The following has nothing to do with the works of  Henry Wadsworth Longfellow, Omar Khayyam (by way of Edward Fitzgerald) or Elizabeth Barrett Browning…or even Ogden Nash or William S. Gilbert.  It merely represents me and my meshugginer muse.

Billions of creatures related to me
Who’ve conquered the land and traversed the great sea
And flew through the air,  and through airless Space.
Aren’t we grand?  A superior race.

But look, look closely at each of our lives
The pain and the want, the frustrated drives
The love for ourselves; fear and hate toward the “other.”
Justice and Freedom we’ve managed to smother.

The pride in our Systems, we eagerly follow
Convinced they hold Truth…
When in fact, they are hollow.
So sure we are right, so sure of our passion,
The world must as well…totalitarian fashion.
We build palaces few while most dwell in bare caves,
And boast we are free…while so many are slaves.
See progress, though nothing, for billions, has changed.
They live the same stories…although “rearranged.”

Those who seek justice are given  no voice,
And so, for the many, are given no choice.
Our minds are imprisoned; our boundaries set;
Our dreams of world freedom are not to be met.

Rise up against power and conqueror’s gold,
But not with the misguided efforts of old.
Not by again going backwards in time.
Rise up for true justice, a new paradigm.

Rise up, for the future must bring a rebirth.
We’re not mere “resources,” we’re “Lords of the Earth.”
No longer to toil as if only a Drone;
As “Kings of the Universe,” we’ll also OWN.

This planet is ours, to own and to cherish.
If few own it all, Earth and mankind will perish.
Rise up! Open your minds NOW, TODAY…
And all then could thrive with a Just Third Way.

A new money system will finally bring
Justice and Freedom…Of thee we sing!

‘Til’  everyone owns,  write and be noisy!