Overview of the Economic Democracy Act

“We are called to be architects of the future, not its victims. . . .  [Our challenge is] to make the world work for 100% of humanity in the shortest possible time through spontaneous cooperation without ecological offense or the disadvantage of anyone.”

The Economic Democracy Act (formerly, the Capital Homestead Act), or “EDA,” is a comprehensive set of monetary, tax and estate policy reforms for economically empowering every American citizen, including the poorest of the poor. The EDA would provide lifetime equality of access to the market-based means for acquiring ownership of productive capital, while safeguarding the private property rights of all owners.

The Economic Democracy Act’s central focus is on establishing a sound, stable, and democratic money and credit system. By universalizing citizen access to insured, interest-free productive credit repayable with future pre-tax corporate profits, and to newly created money backed by productive assets (rather than government debt), it would close the power and opportunity gap between today’s haves and have-nots, without taking away the wealth of today’s owners.

As summarized below, the Economic Democracy Act (EDA) is designed to:

2) Radically overhaul and simplify the Federal tax system to eliminate budget deficits and ownership-concentrating tax barriers through a single-rate tax on all individual incomes from all sources above basic subsistence levels. The EDA’s tax reforms would:

a) eliminate payroll taxes on working Americans and their employers;
b) integrate corporate and personal income taxes; and
c) exempt from taxation the basic incomes of all citizens up to a level that allows them to meet their own subsistence needs and living expenses, while continuing to provide a “safety net” through vouchers and services for the poor.

3) Restructure inheritance and gift taxes (“death taxes”) to discourage transfers of monopolistic concentrations of wealth from one generation to the next. To promote individual initiative, capital self-sufficiency and limited economic power of the state, inheritance policy should encourage the broadest possible distribution of private property ownership in income-producing assets. 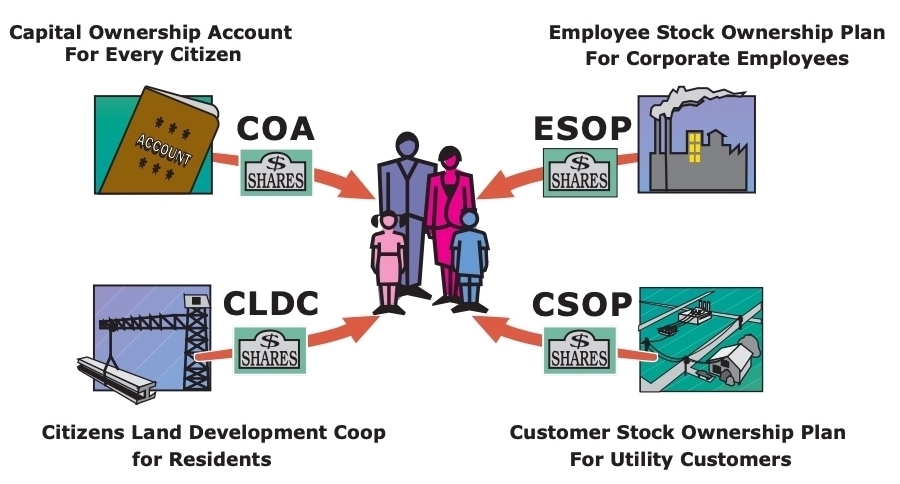 The “Capital Ownership Account” or “COA” is the primary tax-sheltered vehicle for the democratization of capital credit through local banks. It would enable every man, woman, and child to accumulate wealth and receive dividend incomes from newly issued shares in new and growing companies, without being taxed on the accumulations (including property and shares gained through inheritance, savings, and arrangements like ESOPs, CSOPs and CLDCs). In addition to serving as a source of capital credit for corporate workers, COAs would also provide an ownership-building account for individuals who do not work for profit-making enterprises, such as school teachers, civil servants, military personnel and veterans, police, and health workers, and for individuals who have no remunerative employment, such as the disabled, the unemployed, homemakers and children.

The “Citizens Land Development Cooperative” or “CLDC” [also known as the for-profit Citizens Land Cooperative (CLC), Citizens Land Bank (CLB), or Community Investment Corporation (CIC)] allows residents of a community to share in the control and profits associated with land planning and development, and infrastructure improvements. The CLDC would encourage governments at all levels (from the community to the highest governmental level) as well as non-profit entities, to distribute the ownership of land, natural resources, and infrastructure free to all citizens. This would encourage citizens to participate in development so they can share in planning, governance, and lease incomes from the use of land, natural resources, and infrastructure.

The “Employee Stock Ownership Plan” or “ESOP,” which exists under current law, channels low-cost credit for financing the needs of business corporations (such as expansion, capitalization, and ownership transfers), and links private-sector workers to ownership shares and dividend incomes in the companies for which they work. Shares acquired on credit by worker-owners are paid for out of the future corporate profits they help to generate.

The “Consumer or Customer Stock Ownership Plan” or “CSOP” lets customers of utilities share in the ownership, governance, and profitability of “natural monopolies,” like telecommunications, water and power companies, mass-transit, regional highways, and cable television.

A Sound Monetary System to Empower Every Citizen

Money is not a part of the visible sector of the economy; people do not consume money. Money is not a physical factor of production, but rather a yardstick for measuring economic input, economic outtake and the relative values of the real goods and services of the economic world. Money provides a method of measuring obligations, rights, powers and privileges. It provides a means whereby certain individuals can accumulate claims against others, or against the economy as a whole, or against many economies. It is a system of symbols….

Promoting Justice in the Corporation and Workplace