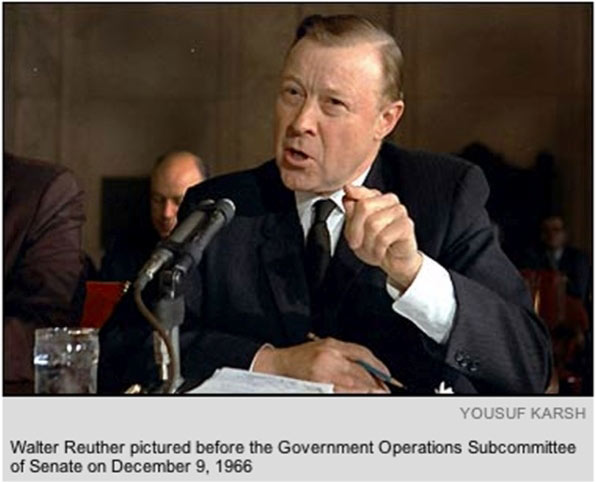 On February 20, 1967, Walter Reuther, President of the United Auto Workers, AFL-CIO, testified before the Joint Economic Committee of Congress, calling for employee stock ownership as a way for workers to gain their income increases out of the bottom line without raising costs to business.

Profit sharing in the form of stock distributions to workers would help to democratize the ownership of America’s vast corporate wealth, which is today appallingly undemocratic and unhealthy.

If workers had definite assurance of equitable shares in the profits of the corporations that employ them, they would see less need to seek an equitable balance between their gains and soaring profits through augmented increases in basic wage rates.  This would be a desirable result from the standpoint of stabilization policy because profit sharing does not increase costs.  Since profits are a residual, after all costs have been met, and since their size is not determinable until after customers have paid the prices charged for the firm’s products, profit sharing [through wider share ownership] cannot be said to have any inflationary impact on costs and prices.

The following page references present other key statements by Walter Reuther in his 1967 testimony, including his support of Kelsonian methods for democratizing to all citizens the ownership of corporate wealth and new technology, as the basis of a healthy and just economy.

p.732   (last line) “I raised the profit-sharing concept in this testi­mony this morning not as it relates to that specific proposal that we made in 1958. I raise it with respect to a broader consideration.”

p.736  “If you look at the income distribution, you see that it is being distorted very dangerously. This is not just a matter of economic justice.  The economy won’t work, it will break down, if we don’t find a more equitable way to share the abundance
of our new technology.”

p.748 Reference to his role as chairman of the Citizens Crusade Against Poverty (CCAP) and Ford plan to train 1000 workers thru CCAP. [Note:  CESJ’s President Norman G. Kurland, served as the Director of Planning for the CCAP during Reuther’s tenure and helped introduce Louis Kelso’s ideas to that organization.]

p.757 democratization of ownership of industry

p.774 shares of stock for democratization of ownership