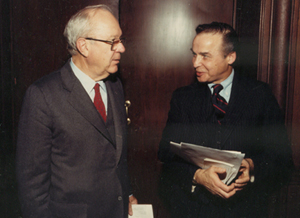 In the chronicles of the expanded ownership movement, the meeting on November 27, 1973, between “ESOP inventor” Louis Kelso and Senator Russell Long in the Montpelier Room of the Madison Hotel, was a watershed event. For the first time, a major political power became excited about Kelso’s concept of how to expand ownership of productive assets and agreed to champion those ideas in legislation.